Last week, Rewilding Portugal celebrated a collaboration protocol with Cinco Quinas, a media partner dedicated to the municipality of Sabugal, a key area for the work of the organization. 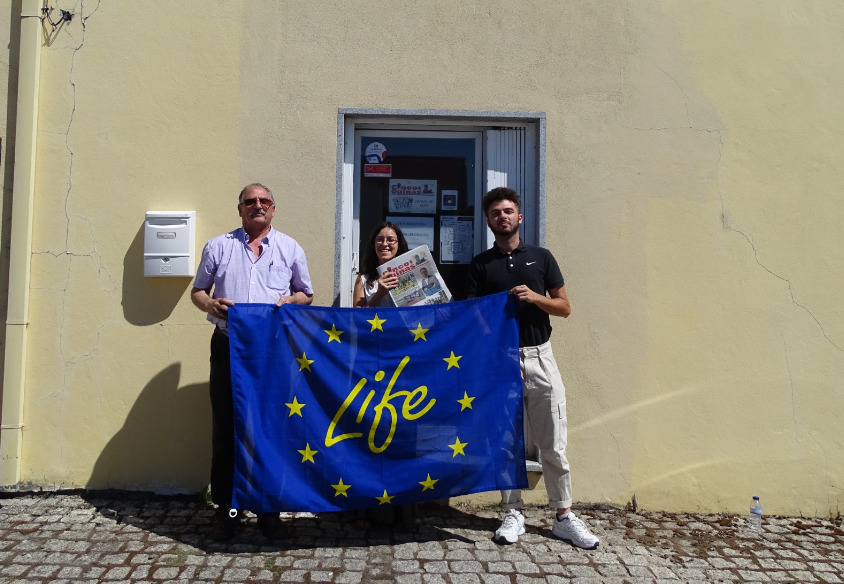 An important protocol celebrated in Sabugal

Cinco Quinas is a monthly printed communication project that is also published daily online and its main mission is to ensure journalistic information in the municipality of Sabugal, standing out for its rigor and impartiality and playing an important informative role in this municipality where Rewilding Portugal carries out several nature conservation actions and where its first property is located, namely Vale Carapito, in Vilar Maior. As such, it can play an important role in the regional and local dissemination of information on the nature protection work of Rewilding Portugal and its partners in the field and foster the creation of a closer and more positive connection with local communities , which is another of the main goals of the organization.

The connection of Rewilding Portugal’s work and Sabugal region

Vale Carapito, a property acquired by Rewilding Portugal to carry out conservation actions that reinforce the ecological corridor of the Greater Côa Valley, is the new area of ​​practical application of rewilding in Portugal. Located near Vilar Maior, in the Sabugal municipality, it promises to be the new showcase of the benefits that rewilding has for nature and what results it can achieve when increased at larger scales. In addition to the rewilding of the landscape and ecosystems, it will also have an important role in promoting sustainable and nature-based tourism, to showcase the application of rewilding and its effects.

With a heterogeneous landscape, good diversity of habitats and associated species, this property has very favorable conditions for rewilding, which is already being carried out. Vale Carapito is part of the Natural 2000 Network and is part of the Serra da Malcata SIC and also benefits from its proximity to the village of Vilar Maior and its amenities and services, as well as the historical and cultural heritage present in the region (Grand Route of the Côa Valley and of the Historical Villages, small routes, etc.)

Another very positive point to highlight has been the adhesion of the local community, namely the official entities of the village, which have supported Rewilding Portugal and their partners when necessary, showing a willingness to help in this mission of making this region of Portugal a wilder and more natural place, and to attract high-quality nature-based tourism, making the region stand out for the best reasons. Through actions to promote the territory and its added value, in a context that respects the nature conservation to be carried out in this place, there are very interesting possibilities for Vale Carapito to actively contribute to enhance this region, supporting the local economic and social fabric.

Several conservation actions have already taken place in recent months, namely the monitoring of flora and fauna, to study the plant and animal biodiversity, as well as the landscape and soil. The purpose of these monitoring actions is to know the area and to be able to compare current levels with the levels after applying rewilding measures (passive or active management in specific cases). Actions to promote natural grazing are also being carried out, through the use of herbivores in a semi-wild state; other planned actions include the removal of obsolete structures, which act as barriers to the region’s wildlife; control actions for invasive species; active fuel management actions and surveillance actions.

According to Pedro Prata, Team Leader at Rewilding Portugal, “This work in Vilar Maior is the first concrete step as part of a connectivity strategy for the ecological corridor of the Greater Côa Valley. Our work here will allow us to refine the strategy of rewilding at the landscape level.”

The commitment to carry out nature-based tourism in Vale Carapito will generate new economic opportunities for the community, since it is possible to develop a new business model to bring nature back to areas marked by economic decline, loss of population and agricultural abandonment. Helping nature to recover, restore functional ecosystems, with a great abundance and diversity of wildlife can bring benefits to local populations. For this same reason, tourist packages have already been created through partnerships with Impact Trip and the European Safari Company, as tourist offers with more individual experiences with the operators of the Wild Côa Network, which include activities in Vale Carapito in order to discover nature in a conscious and responsible way.

Another important step towards this was the partnership celebrated with the Associação Muralhas de Vilar Maior, chaired by Joaquim Simões and created to promote intergenerational contacts in the village, developing activities for all age groups; preserve and disseminate the cultural, material and immaterial heritage of the village; enter into partnerships with entities that help promote Vilar Maior and develop new activities in the village; and also, to disseminate Vilar Maior and its heritage abroad. It is exactly in these last two points that the partnership with Rewilding Portugal fits, which will bring to the territory several activities to promote Vilar Maior and its very rich cultural and natural heritage, namely through visits and photographic marathons, as well as promotional actions in social media and dissemination through digital influencers.

Rewilding Portugal is the coordinating entity of the LIFE WolFlux project (LIFE17 NAT / PT / 00554), funded by the European Commission, within which conservation actions for the Iberian wolf are developed in the south of the Douro River, and has the role of promoting the dissemination of information about this species and measures that promote coexistence in the region.

In addition, Rewilding Portugal is also one of the partners in the project Scaling Up Rewilding in Western Iberia, coordinated by Rewilding Europe and financed by the Endangered Landscapes Program, managed by the Cambridge Conservation Initiative and financed by Arcadia, a fund of Peter Baldwin and Lisbet Rausing. This project aims to enhance the region’s natural and cultural heritage, promoting local economies based on nature. Both of these projects are being developed by a partnership, which in addition to Rewilding Portugal and Rewilding Europe also includes the University of Aveiro, AT Natureza and Zoo Logical.