The LIFE WolFlux project, in an action coordinated by Rewilding Portugal and Rewilding Europe, developed, this November, the first training of nature guides, with the objective of betting on local entrepreneurship in the Greater Côa Valley and promote the operationalization of this activity in a more sustainable way and that respects and values the surrounding natural heritage.

Local promotion of opportunities and knowledge

This four-day guide program aims to support the local nature-based tourism sector, seeking to train new nature guides in the region and make them aware of the concept of rewilding and how it can have an important role in its offer of experiences and in the transmission of knowledge to the public, as well as the emblematic species of the Iberian wolf, knowing that its preservation and expansion needs to be accompanied by nature guides able to deal with it and to know how to respect their space and habitat when operating in the field.

Aukje van Gerven, Rewilding Europe’s tourism and training manager, kick-started this initiative by highlighting its major objectives and the mission to which this type of action is proposed. “It’s important for local guides to be trained in the area of responsible tourism and hospitality, to upgrade nature-based tourism & tourism businesses in natural areas. In addition to enhancing the services these guides can provide to their guests, the training will also enable them to act as ambassadors for rewilding”. 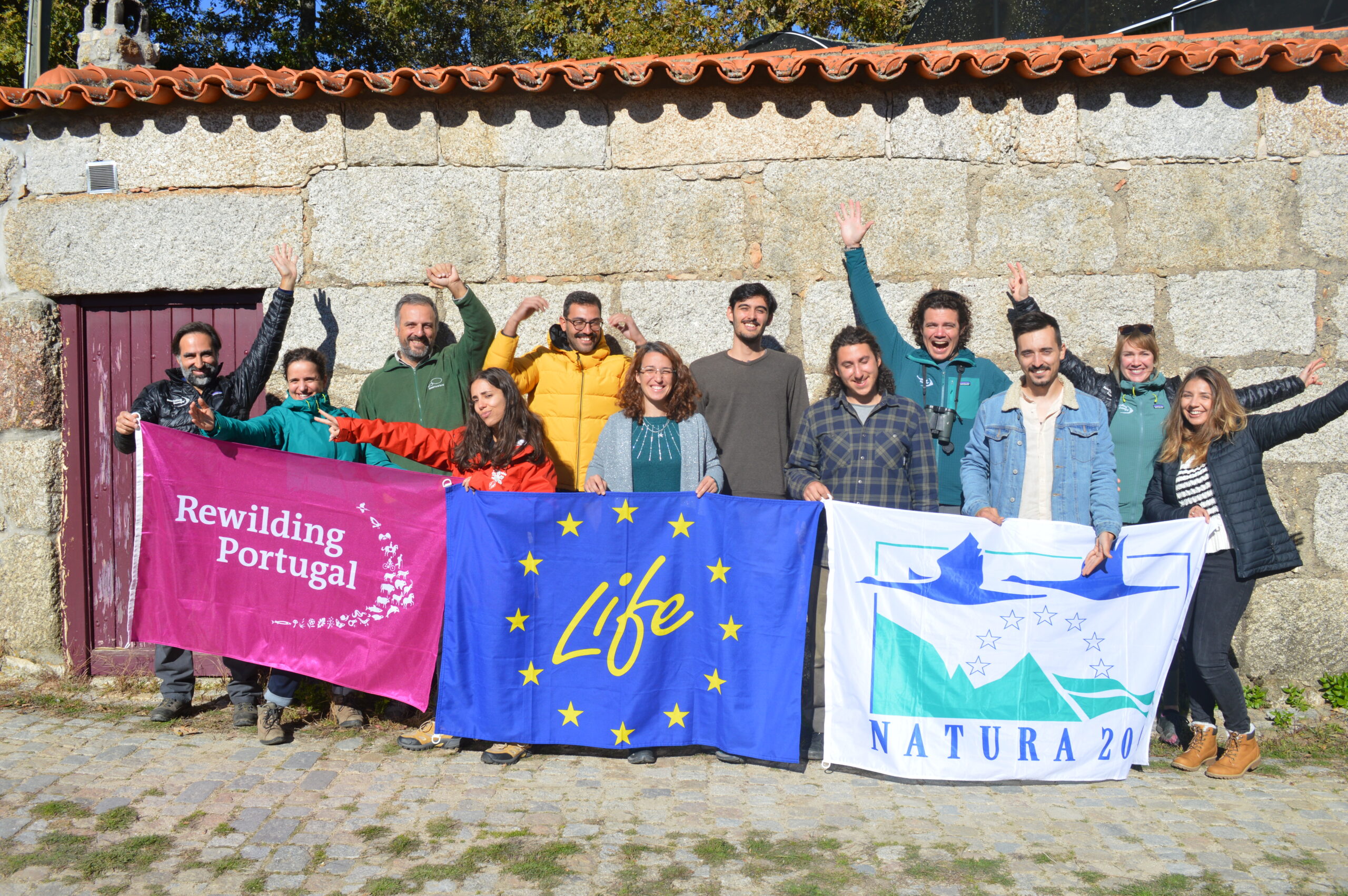 A group dedicated to take the opportunity

After many dozens of entries, the eight participants of this first edition were selected: Alcina Sousa, Ana Magalhães, Catarina Prata, Hugo Ribeiro, José Almeida, Ricardo Peres, Samuel Ribeiro and Sarah Pires. A group that showed itself to be very enthusiastic and dedicated to this opportunity from day one, when they were received in the morning at the headquarters of Rewilding Portugal, in Quinta da Maúnça, in Guarda. With an introduction given by Simon Collier (trainer and owner of Nature Tourism Development), Pedro Prata (team leader at Rewilding Portugal), Daniel Veríssimo (business officer at Rewilding Portugal) and Aukje van Gerven (Rewilding Europe´s tourism and training manager), the group of participants soon had an opportunity to introduce themselves, explain their background experience and motivations for the course, and have a first small practical challenge on how to work in team, preparing together an argumentation on a topic of choice related to nature tourism, to then discuss collectively. Even before the official start of the more practical activities of the program, there was the opportunity, on a short walk around the property, to test the binoculars that were given to them and to have a social lunch with several members of the Rewilding Portugal team. 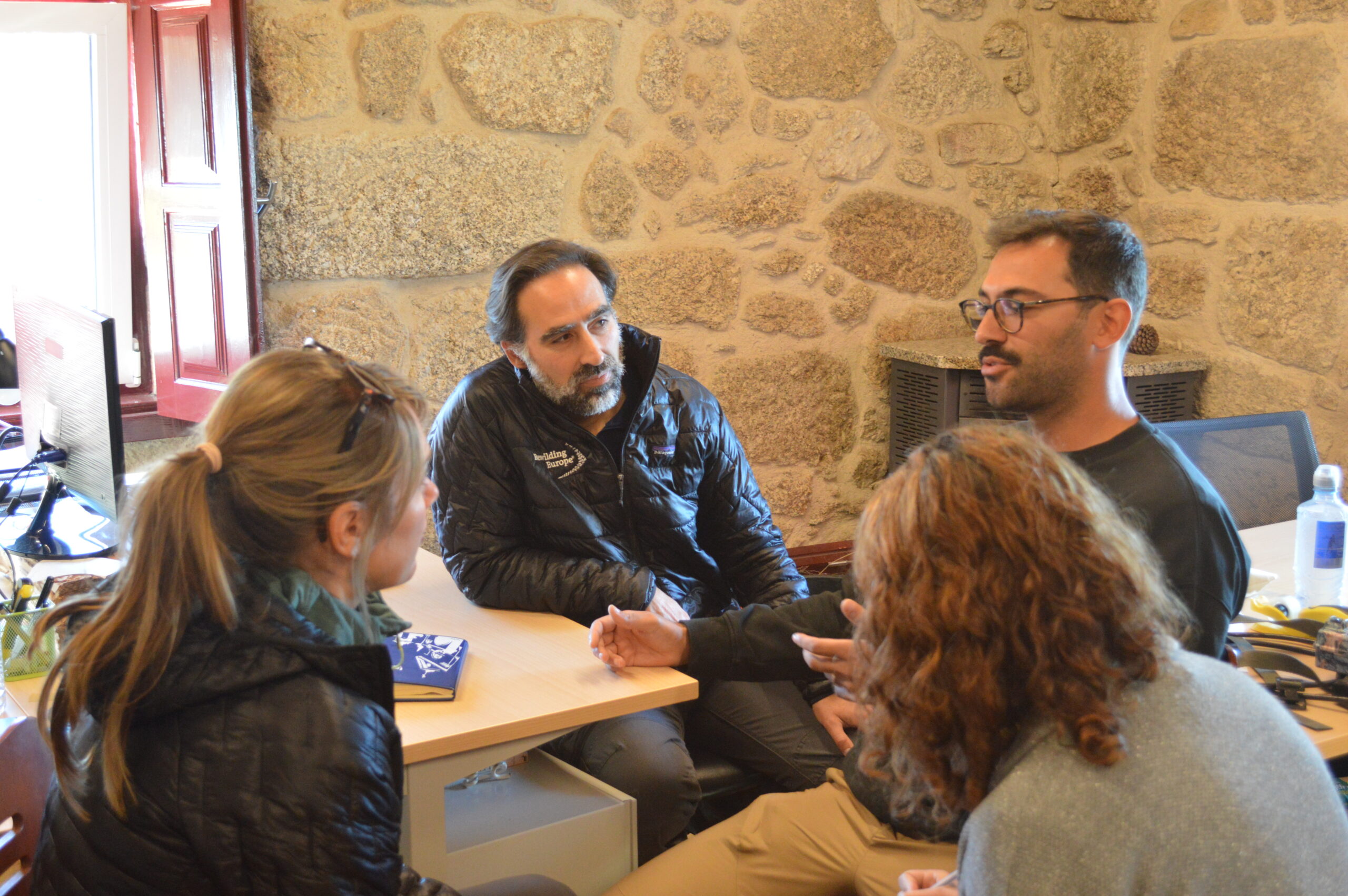 The group then went to the village of Vilar Maior, in the municipality of Sabugal, where the participants were immediately introduced to the facilities where they would stay and to have their meals for the first two days: the small accommodation unit developed by the village and also Casa Villar Mayor, member of the Wild Côa Network. One of the great faces of this training was Fernando Romão, as the Wildlife Portugal nature guide (also a member of the Côa Selvagem Network) was chosen as the local expert guide for the activities of the training.

The afternoon session began with Fernando Romão’s guided visit to Vale Carapito, property managed by Rewilding Portugal in that area, and in which the participants had their first contact with what it means to be a nature guide, with the main challenges that can appear during a visit and also with the practical work of Rewilding Portugal in the field. A first important impact, which was then debated and evaluated in a group at the end of the day, as a way to close the work of this start of the initiative. 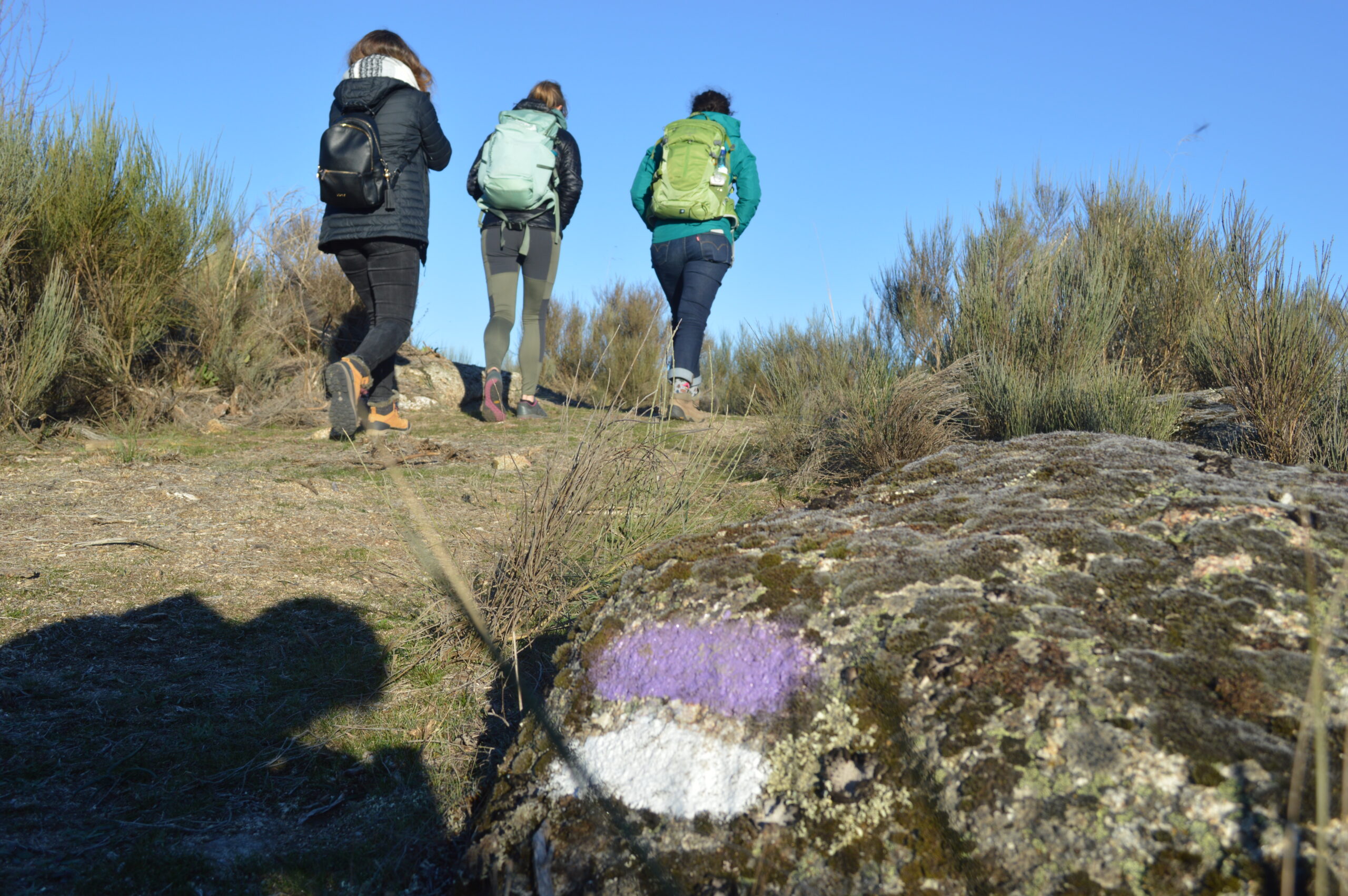 On the second day, in the morning, Patrícia Gil, CIBIO’s Iberian wolf specialist, provided the group with specialized training in the behaviour of the species, several important aspects to consider in its observation activities, and also how to make it sustainable tourism adapted to the Iberian wolf’s own sensitivity and characteristics. A fundamental and essential species in national and local ecosystems, which is important to preserve, and which is therefore very important to consider when working in nature tourism close to their habitats.

During the afternoon, there was a more dedicated practical application of what they had been learning so far, in which, in addition to a class abroad, the group had to apply the nature guide techniques they had already had contact with, namely through role-playing activities, in which the remaining members of the group became groups of challenging tourists so that the chosen guide could direct them in the right way and thus learn to deal with unexpected situations that can happen in various types of scenarios. . Another key aspect that this day focused on was also the transmission of knowledge related to sustainable tourism and the ethical principles that should apply to this type of professional activity, as being a nature guide requires special and dedicated preparation in this field, as these professionals will use as a backdrop a very rich natural heritage that is important to preserve and care for. 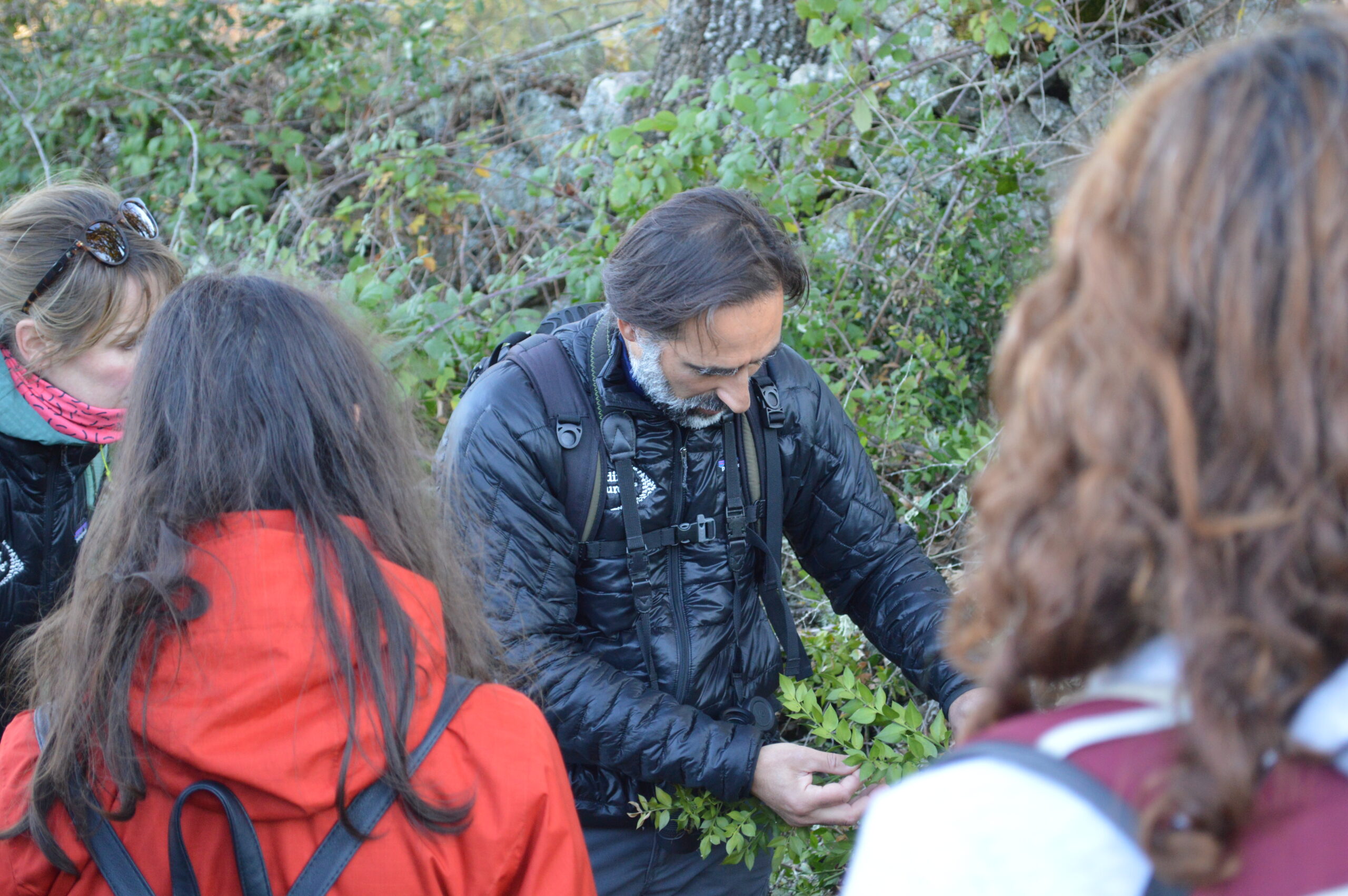 On the third day, the group said goodbye to Vilar Maior, but first participated in a webinar of Rewilding Training Tourism, dedicated to involvement with local communities, taught by Simon Collier and also with an active participation of Fernando Romão, who answered several questions about his activity both to the participants of this tourism training and to the other participants of the webinar via online, as well as to Daniel Veríssimo, business officer at Rewilding Portugal who answered several questions from the participants about the day-to-day that his position implies. Another initiative with relevant importance, since in the interior regions of the country, the involvement of the local population is fundamental for successful experiences that value the places and traditions they pass through.

The program then continued at the Faia Brava Reserve, managed by ATNatureza, where participants had to apply all the knowledge they had learned over these days, with practical experiences as nature guides, in a real context. After that, at the end of the day, the participants got to know the place where they were going to stay on that last day, Casa da Cisterna, another member of the tourism network. During the late afternoon, there was also a meeting with the various members of the Wild Côa Network, who had the opportunity to explain to the participants what their activities consist of and exchange important knowledge about the practice of the profession. 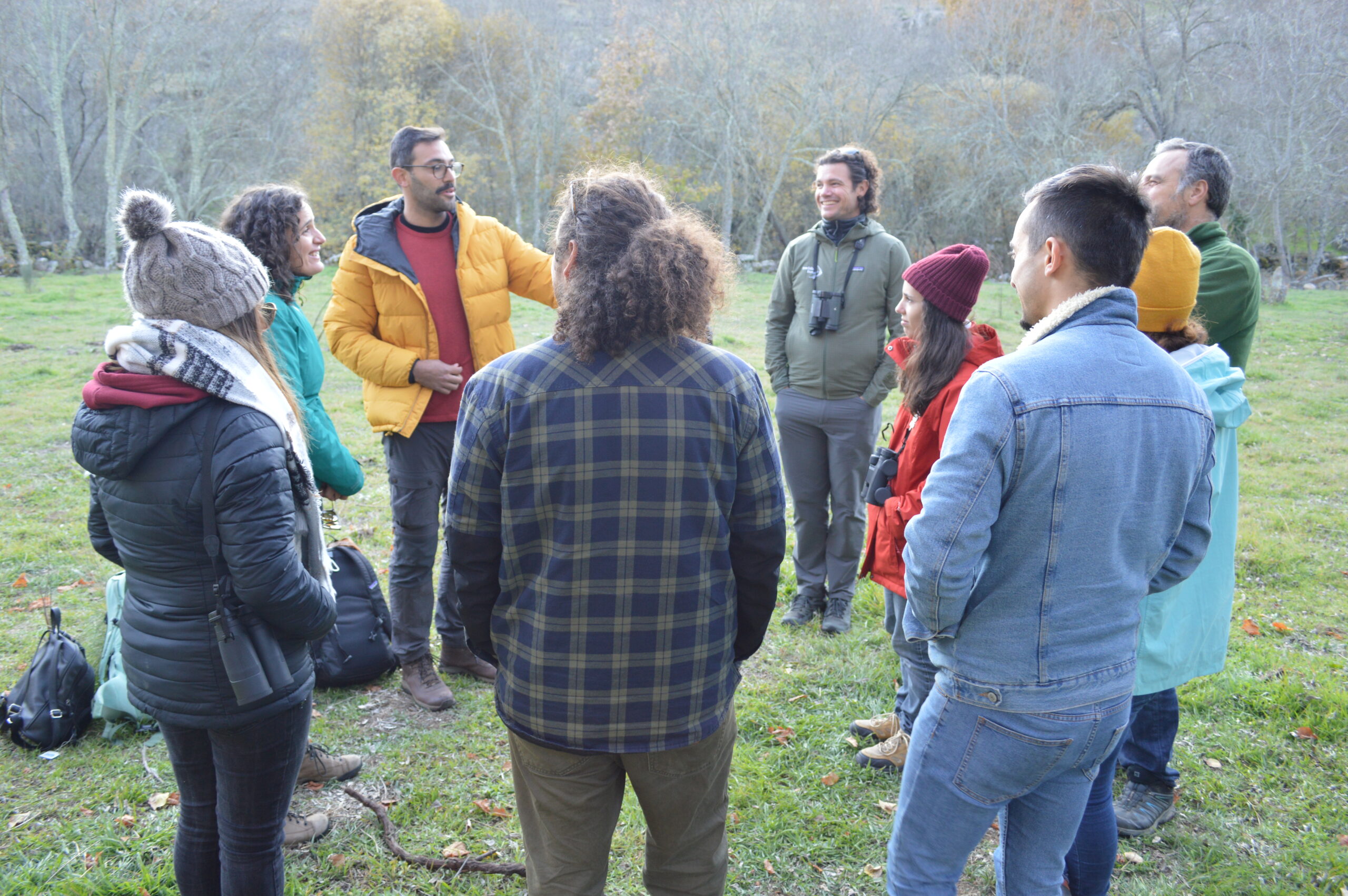 On Thursday, the day of the program’s closing, there were the last individual sessions, in which the participants gave their feedback on the experience and also received comments from those responsible about their performance throughout the training, after which they were awarded with the certificate of the activity, which is expected to be the beginning of a long connection between each of them to nature tourism and the promotion of the natural heritage of the Greater Côa Valley and other natural areas of our country.

Daniel Veríssimo, from Rewilding Portugal, was satisfied with the results obtained and considered this to be the first step in a long way to go. “I hope that this training of nature guides is the beginning of a hike, which is expected to be a marathon for the guides who have just started and that it will be a compass for the more experienced ones who also participated, such as José Almeida from DreamOverland or Samuel Ribeiro from Beir’aja. Nature tourism is an important stone in the nature-based economy that is being developed in the Greater Côa Valley,” he said.

This action was carried out within the scope of the LIFE WolFlux project, which aims to promote the ecological and socio-economic conditions necessary to guarantee the long-term viability of the Iberian wolf subpopulation south of the Douro river.

The LIFE WolFlux project is being coordinated by Rewilding Portugal in partnership with the University of Aveiro, Rewilding Europe, Zoo Logical and ATNatureza. It is funded by the LIFE Program of the European Union and is co-funded by the Endangered Landscape Programme, which is managed by the Cambridge Conservation Initiative and is funded by Arcadia, a philanthropic fund of Peter Baldwin and Lisbet Rausing.