Hati: the guarding dog that never leaves its herd

Hati, one of the dogs integrated by the LIFE WolFlux project to support livestock producers in the region and promote good coexistence practices between local communities and the Iberian wolf, lived an emotional story in September, in which he showed that he was made for these functions .

An adventure with a happy ending

Hati, a guarding dog of Serra da Estrela breed integrated by the LIFE WolFlux project at Quinta do Tabalião, Guarda, in 2020, is the perfect example of the extremely important role that these dogs play in the safety of cattle and their monitoring, faithful and dedicated to them in any circumstance. The producer who is now the owner tells us that, in a morning when they called for Hati and the Angus herd they own and did not get an answer, they found, when checking the park where they were usually grazing, with “various areas of the the farm’s peripheral fence cut and the gates, closed the day before, completely open”, with no sign of the animals or their protector Hati.

It was then that they began to look for them and, “after a long walk around the farm”, they found them at the other end of the property, lying next to the fence that protects another herd at Quinta do Tabalião. And who was with them, without ever having abandoned them? Young Hati, who without eating or drinking, never left them under any circumstances, having accompanied them all the way and ensuring their protection. This faithful companion stood by the side of Angus’s herd throughout the incident and was guaranteeing that nothing happened to them until they were found.

The importance of guarding dog’s integration and their protective function

This little story with a happy ending illustrates the importance of integrating guarding dogs such as Hati. Serra da Estrela dogs are one of the oldest dog breeds in the Iberian Peninsula and have protected cattle in the south of the Douro for centuries against Iberian wolves and stray dogs. This is, however, a tradition that is being lost, especially in territories where the wolf is seen just sporadically. This umbilical connection of dogs, which are introduced at a very young age in herds and flocks so that they see them as family and feel part of them, with the animals they protect is very special and it is in fact a mission they take very seriously.

A farm with Serra da Estrela dogs is more effectively protected from predators, especially in the case of a rocky and shrubby habitat, such as that which characterizes the region of the Greater Côa Valley. Dogs remain with the cattle, sometimes in the middle of the herd or the flock and other times at a distance in a place with good visibility, ready to go into a state of alert when they detect a potential threat to the animals.

The LIFE WolFlux project aims to increase the connectivity of the Portuguese Iberian wolf subpopulation south of the Douro River, promoting the socio-ecological conditions necessary to improve the conservation status of existing packs and for the juvenile wolves to disperse and settle in new territories. The integration of livestock protection dogs has a fundamental role in making it difficult for the wolf to harm livestock. This is important from a social point of view, to mitigate negative impacts on livestock, and from an ecological point of view, as the wolf begins to depend less on domestic prey, feeding on wild prey and performing its role as a top predator in the ecosystem. For this to be possible, there must be diversity and abundance of wild prey, which in Portugal are fundamentally wild boar, roe deer, deer and iberian ibex. 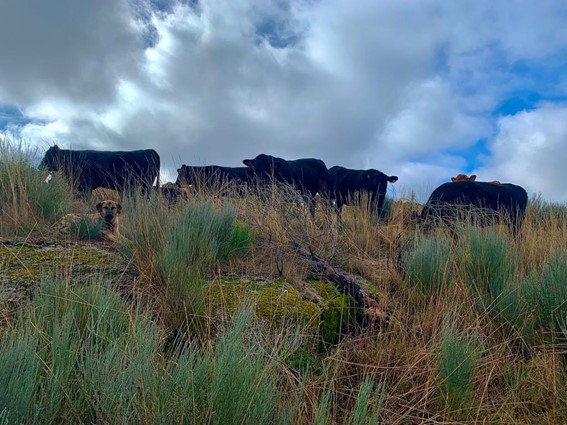 It is hoped that the integration of livestock guarding dogs will continue to set a positive example that can be followed by other livestock breeders in the region, improving coexistence with local communities. “By reducing predation on wolves and thus promoting coexistence between people and the wolf, these dogs are contributing to the recovery of the species, increasing stability, and the territorial expansion of already established packs”, explains Sara Aliácar,  Conservation Officer at Rewilding Portugal.

Rewilding Portugal has been integrating these dogs south of the Douro River for free, as well as guaranteeing their veterinary and food expenses until they reach one year of age. In addition, the education of the dog and its integration with the herds and flocks is monitored to ensure a correct adaptation and learning of its functions as a livestock guarding dog.

The LIFE WolFlux project is financed by the LIFE program of the European Union and co-financed by the Endangered Landscapes Programme. The project is being implemented by a partnership of several entities, namely Rewilding Portugal, Rewilding Europe, Associação Transumancia e Natureza, Universidade de Aveiro and Zoo Logical.