Boots on the ground to protect nature

Rewilding Portugal’s surveillance team travels thousands of kilometres to protect nature. The team’s mission is to detect and report environmental crimes such as snares or wildlife poisonings. They are also part of the national effort to detect rural wildfires.

The importance of removing snares

It’s seven thirty in the morning and Rewilding Portugal’s surveillance team is ready to start another day in the field. The weather is cold and overcast, a chilly wind blowing against their raincoats, a typical January morning in Guarda. They climb onto their motorbikes and embark on a two-hour drive through rural northern Portugal, travelling first through the highway, and then down winding local roads and dirt paths.

Miguel Pontes and Gonçalo Matos are the boots on the ground of Rewilding Portugal, working every day to find and report environmental crimes such as snares, poisonings, or rural wildfires. Their work is crucial to protect nature in the region south of the Douro River, in the districts of Aveiro, Viseu and Guarda. Wildfires and poaching are two major threats to many wildlife species in the region, including the threatened Iberian wolf.

At 10.30 am they arrive at the Montemuro mountains, where they will be patrolling today. Their task is to travel with their motorbikes along dirt paths, animal trails and along the edges of cultivated and grazed areas, trying to locate snares. Snares are devices used for catching wild animals, usually with a rope or wire that tightens around the animal – and they are illegal in Portugal. They are usually used by locals to catch wild boar, an animal which causes significant damages to local crops and is also an appreciated meat. However, because of the unselective nature of snares, these traps can catch many different animals – including the Iberian wolf.

Between 1997 and 2019, six wolves have died south of the Douro River due to snares, although the real number is likely to be higher, as most often than not animals caught in snares are quietly disposed of without anyone being none the wiser. This is significant for a population with fewer than 50 individuals, an estimate that is itself probably too high – there are likely even fewer wolves left in the region. To address the threats to this wolf subpopulation in Portugal, in 2019 the European Commission approved and funded the LIFE WolFlux project, which aims to ensure the long-term viability of the wolves south of the Douro River. The surveillance team is one of the ways in which this project is trying to protect the species.

After searching for a few hours, the surveillance team pauses for lunch, sitting in a high place and taking the opportunity to assess the land below and the spots where snares are most likely to be found. The Arada and Montemuro mountains are currently home to between 30% and 50% of the total wolf population south of the Douro River, which is why this area was designated as part of the national Natura 2000 network to protect priority habitats and species. However, more than 70% of this area has burned at some point in the last ten years. While fire is a natural part of ecosystems, nowadays wildfires happen too frequently, leading to the degradation of habitats and soils, and harming both people and wildlife.

Walking at the edge of a cultivated field after lunch, the surveillance team strikes gold – several snares placed inconspicuously over an area of several square metres, armed and ready to catch whatever crosses this area. This is the type of place snares are usually found – near cultivated fields and pastures, where these wild animals can cause the most damages and their passage is more predictable.

The team records the coordinates and takes photos, documenting the evidence. This is important information to send to the authorities. First, though, they get in touch with Rewilding Portugal’s Head of Conservation, Sara Aliácar. She is the one who will communicate the location of these snares to the GNR-SEPNA, the Portuguese police branch responsible for persecuting environmental crimes.

It is hard to leave the active snares behind, but the surveillance team knows it is important to leave things exactly as they found them. This increases the chances of catching the culprit. Today was a good day – finding snares is a difficult task requiring a huge investment of time and effort. Sometimes it can also be discouraging work. Even for the snares that are found, very often it is not possible to identify to person who placed them, and the crime goes unpunished. It is precisely because it is so difficult to hold people accountable for this type of environmental crime that it is still common in northern Portugal.

As the surveillance team prepares to leave the area and return home, they come across a local shepherd with his flock of goats and sheep, returning home for the day. The man asks the surveillance team who they are and what they are doing there. This is another of the team’s responsibilities – talking with people from local communities about Rewilding Portugal’s work and creating awareness about the dangers of environmental crime. According to the team, “It is one of the priorities of our work. We need people in local communities to trust us so that our work is successful. Communities are learning to coexist better with wildlife, but there is still some resistance and part of our work is trying to help them see how damaging some of these practices can be.”

The shepherd is sympathetic and tells the team he has lost one of his livestock guarding dogs to a snare last year, it was a good dog he adds. He waves goodbye as the surveillance team get back on their motorbikes and head back home. 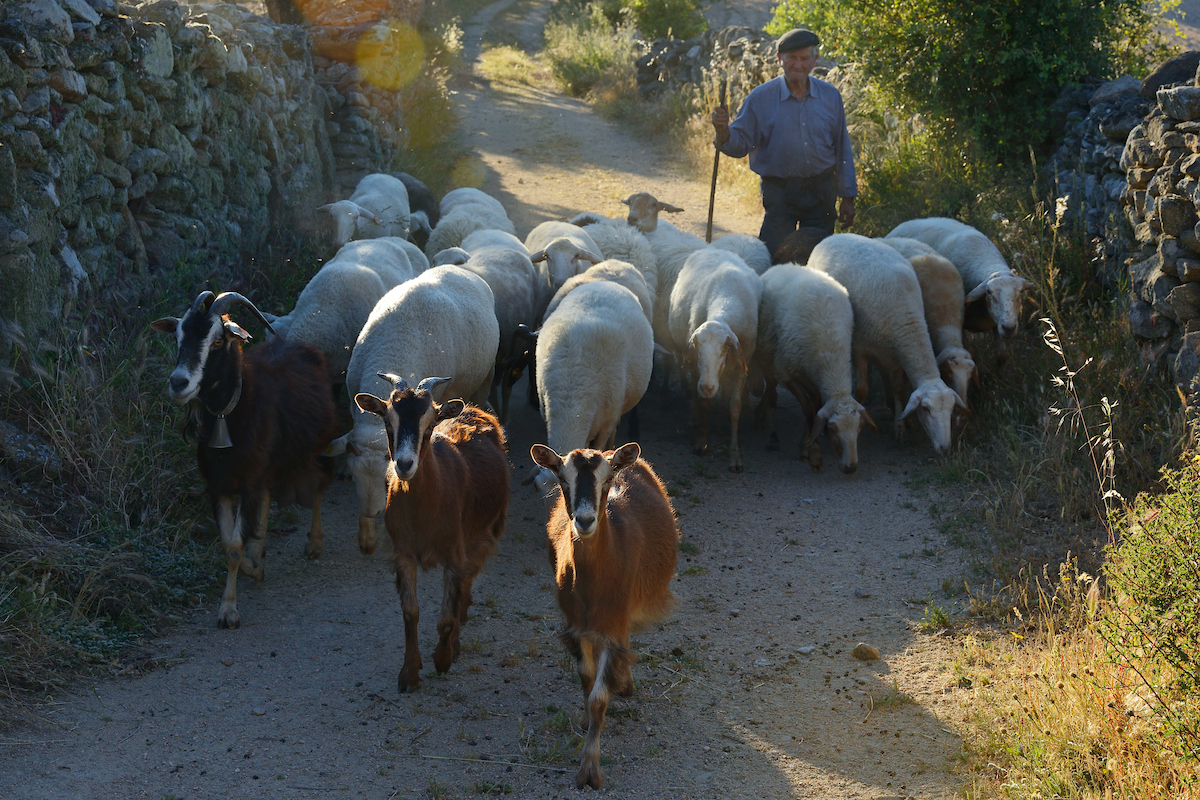 On the lookout for wildfires

During the warmest part of the year, from March to October, the surveillance team has an additional task on their hands – looking out for rural wildfires. Besides snares, this is one of the main threats to wildlife in the region. In the 9,000 km2 patrolled by the team, in the districts of Guarda, Viseu and Aveiro, 25% of the area has burned at least once between 2008 and 2018.

This grim figure lurks in the back of their minds as they scan the landscape with their binoculars, perched atop a large boulder in Encostas da Juvénia, one of Rewilding Portugal’s nature reserves. It is almost noon, and the next few hours will be the most dangerous, as temperatures soar and the sun blazes down on an almost bare landscape. This area in particular burns every 2.7 years, a punishing frequency that prevents forests from coming back.

The surveillance team has chosen this vantage point as it commands a good 360º view around them. Besides their binoculars, they also have a drone which can be used to scan a larger area of ground. The goal here is to detect a wildfire early. The earliest the better. A few minutes can make the difference when it comes to putting out a fire, especially on a windy hot day.

Wildfires affect biodiversity in many ways. For the wolf, fire means fewer wild prey and having to move from a preferred area to less suitable habitat. Wildfires can also destroy breeding sites for the wolf, and in a worst-case scenario can even lead to direct mortality of the species. All this creates an unstable environment for wolf packs, making them more vulnerable and affecting their chances of breeding successfully. 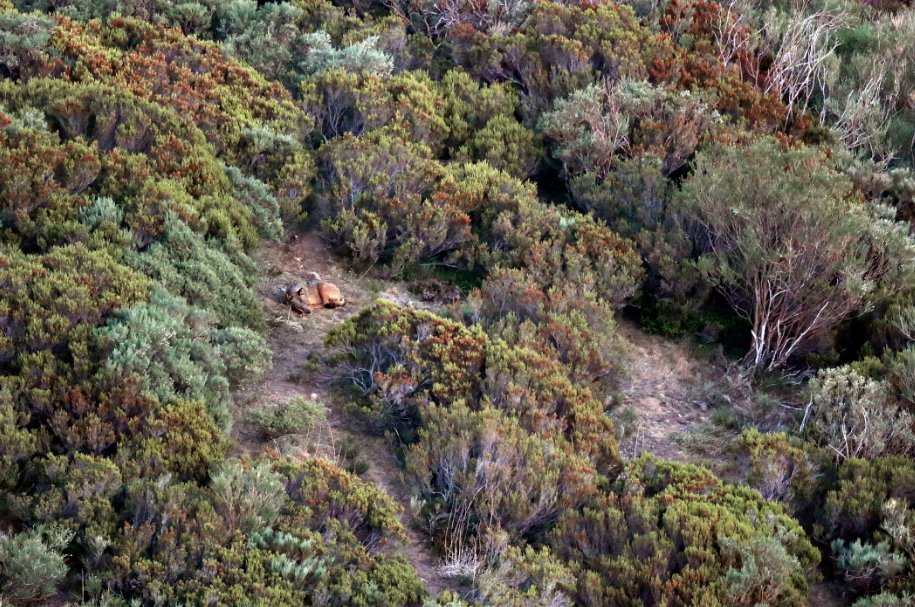 When fires are very frequent and intense, they also degrade the soil, destroy the seed bank and reduce the local biodiversity of plant species. The plants that are best adapted to frequent fire, such as broom, become dominant and trees are unable to grow back. The result are poor soils and landscapes without heterogeneity, with large areas of brush dominated by only a few species. These simplified ecosystems have fewer species and harm people, since soils are not as productive, the vegetation captures less carbon and water retention, and infiltration is reduced.

For these reasons, from March to October, Miguel and Gonçalo were part of the Integrated Rural Fire Management System (SGIFR), coordinating closely with national authorities to increase the overall fire surveillance effort in the region.

Today, no fires. After many hours of scanning the horizon for any sign of smoke, the surveillance team head back home, tired but happy that Encostas da Juvénia remains safe.

At the end of the year, the surveillance team reflect back on their work. According to Gonçalo, “This first year on the ground has been good, the landscapes are incredible, the areas are diverse. There is little wild fauna in some areas, while higher and stable densities are already observed in others.”

After many kilometres travelled, Miguel and Gonçalo are categorical in stating that this work has won them over, but each for different reasons. For Miguel, his interest came from “having the opportunity to play an active role in nature conservation”.

For Gonçalo, it was “having a connection with livestock farmers and the ability to have a different impact on the ground by getting directly involved with the producers and supporting them. Same thing with hunters. We all work together.” A local livestock owner and hunter himself, Gonçalo represents what the future can look like in the region, a positive coexistence between human activities and nature.

In terms of results, in 2021 the team detected twenty-nine snares which were disarmed and removed, and travelled a total of 29,100 Km. When it comes to surveyed transects, the team travelled 7,405 Km to detect snares and other environmental crimes. The team has kept an eye on high-priority areas for the Iberian wolf and other important areas for biodiversity and helped raise awareness in local communities.

In 2022 they will continue their work, which is becoming more targeted as the team learns what works best and which approaches bring the best results. Rewilding Portugal will continue to bring more awareness about the need to prosecute environmental crimes and educate local communities about the damaging effects these crimes can have on people, the climate, and biodiversity.

After all, what do vultures eat?