October 27th will be marked as another moment that has some much of unusual as magical (something that nature get us used to with its natural unpredictability and magnificence): the return to nature of the cinereous vulture called Fado, in a beautiful irony of fate. 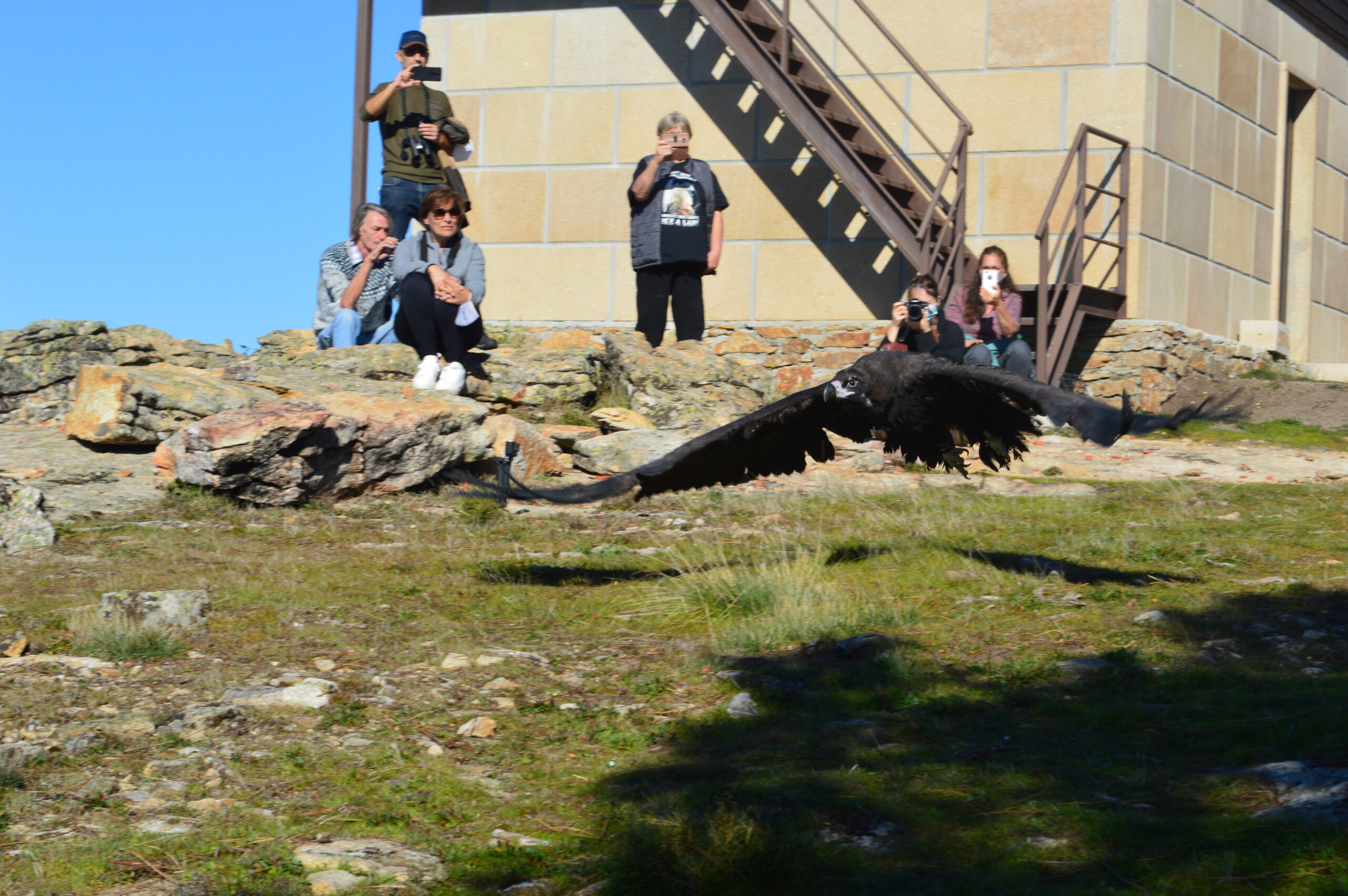 The unpredictability of nature

24th of August, another day of fieldwork for the Rewilding Portugal team. It would be, at first, a calm day and similar to so many others, but the truth is that we are always getting used to the fact that nature surprises us and changes our plans in the fluidity of its natural processes. Two field technicians from our team, Pedro Ribeiro and André Couto, were working in Malcata mountains when, on a dirt road, they came across one of the most imposing animals in our ecosystems: a cinereous vulture. A very young specimen, the largest bird of prey in Europe and the second largest in the world, was standing on the road, visibly frail and debilitated. Although this species can reach 120cm in height and have a wingspan of up to 310cm, this specimen was only born this summer and showed many signs of malnutrition, needing to receive professional support. 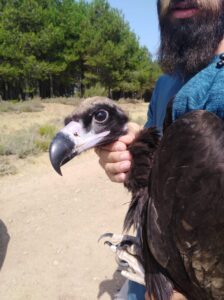 After contacting the ICNF team, responsible for carrying out this type of rescue in these situations, the best solution found to be able to immediately help the animal was to be transported directly by the Rewilding Portugal team to an ICNF team so that it could then be forwarded to a specialized wildlife recovery center, in this case CERVAS, located in Gouveia. And it is on this trip, which would end up saving the life of this animal, that the “fate” of its own name was fulfilled.

Pedro Ribeiro, field officer at Rewilding Portugal, tells what happened. “Me and another colleague of mine found this cinereous vulture in Serra da Malcata, on a dirt road, and it didn’t move, it was very tired and thin. It was a young man just out of the nest and we caught him and handed him over at ICNF who then referred him to CERVAS for recovery,” he explained. “It has this name because when we picked it up and transported it, the vulture was very stressed, scared and moved a lot and more than halfway there we turned on the radio softly and when it started to play fado (a traditional portuguese style of music) on one of the radios, and the truth is that he calmed down and realized that everything was fine and made the trip much more relaxed,” he said. He was therefore playing fado on one of the radios at the precise moment it was turned on. And coincidence of fate, the cinereous vulture accepted the help that needed and let himself be taken on that journey that would be his trip back to freedom when he was ready. And in this unpredictable fate that nature has given us, the name came naturally, Fado, a word that gaves name to that portuguese style of music and that also means “fate” in portuguese, a huge and happy coincidence. 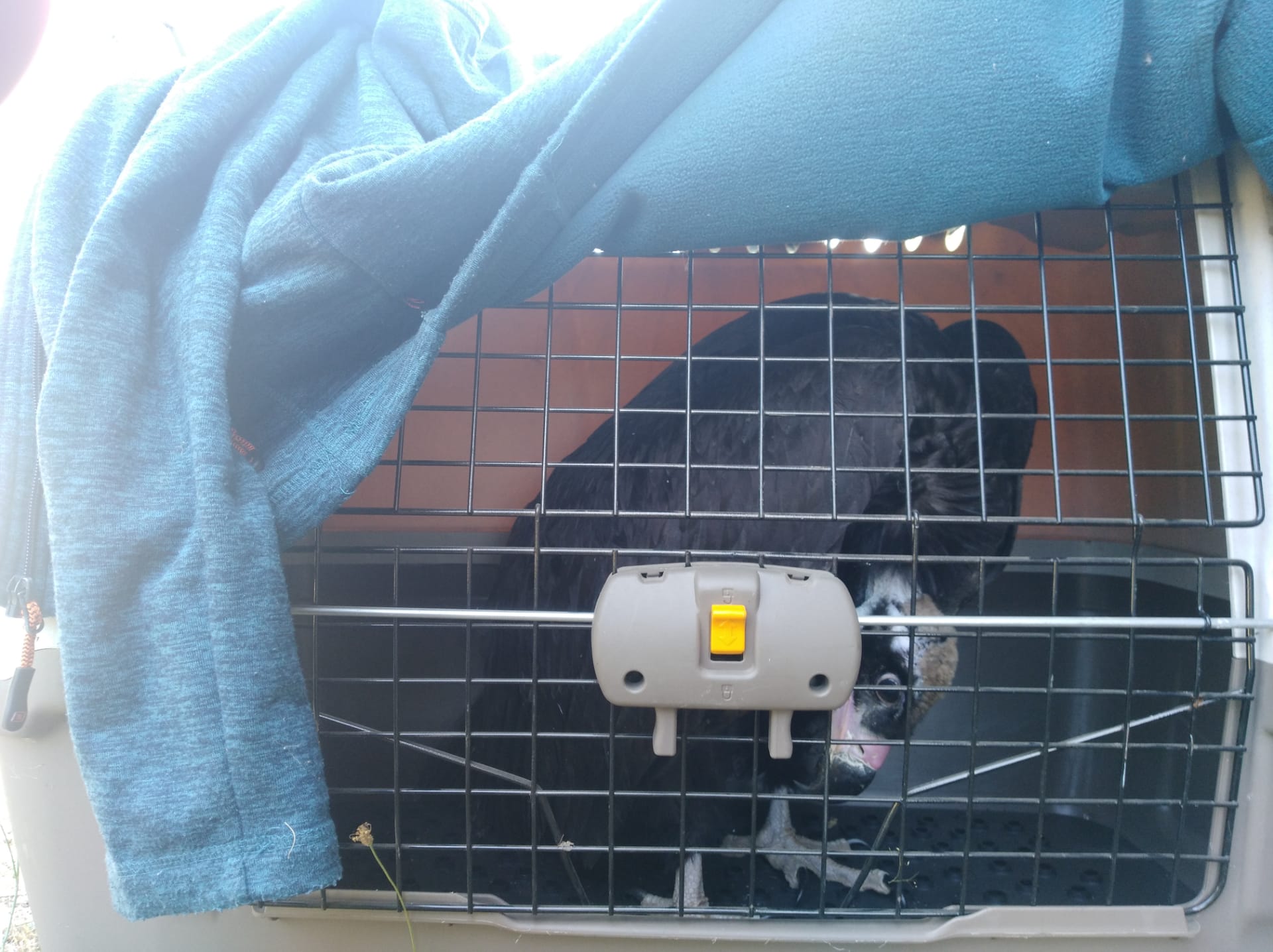 The return to the wild 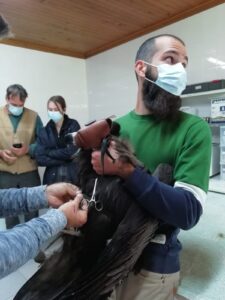 From the moment of its rescue, Fado found itself recovering at the CERVAS facilities, where it gained weight (more than doubled it) and recovered the necessary strength to be able to return to where it belongs: to the natural world. When it arrived, it weighed only 3.5 kilos, when the normal for a cinereous vulture, even if it is juvenile, is to exceed 6 kilos. At that time of summer when juveniles come out of the nest and learn how to fly and explore the territory, it can cause some to stray too far and end up disoriented, flying great distances aimlessly to exhaustion, as happened with Fado, which was found malnourished and dehydrated. In these two months of recovery at CERVAS, he not only gained weight but also exercised his wings in a flight tunnel.

Rewilding Portugal has followed all its development over these weeks and will now follow the many trips and adventures that Fado will certainly have to count on in its journey of discovery and exploration, while it becomes an adult so that he can later raise a family and nest himself. , making an important contribution to the conservation and continuity of the species. For this purpose, a GPS transmitter has been fitted, which will allow us to know where he is going, as well as his usual food and sleeping points. 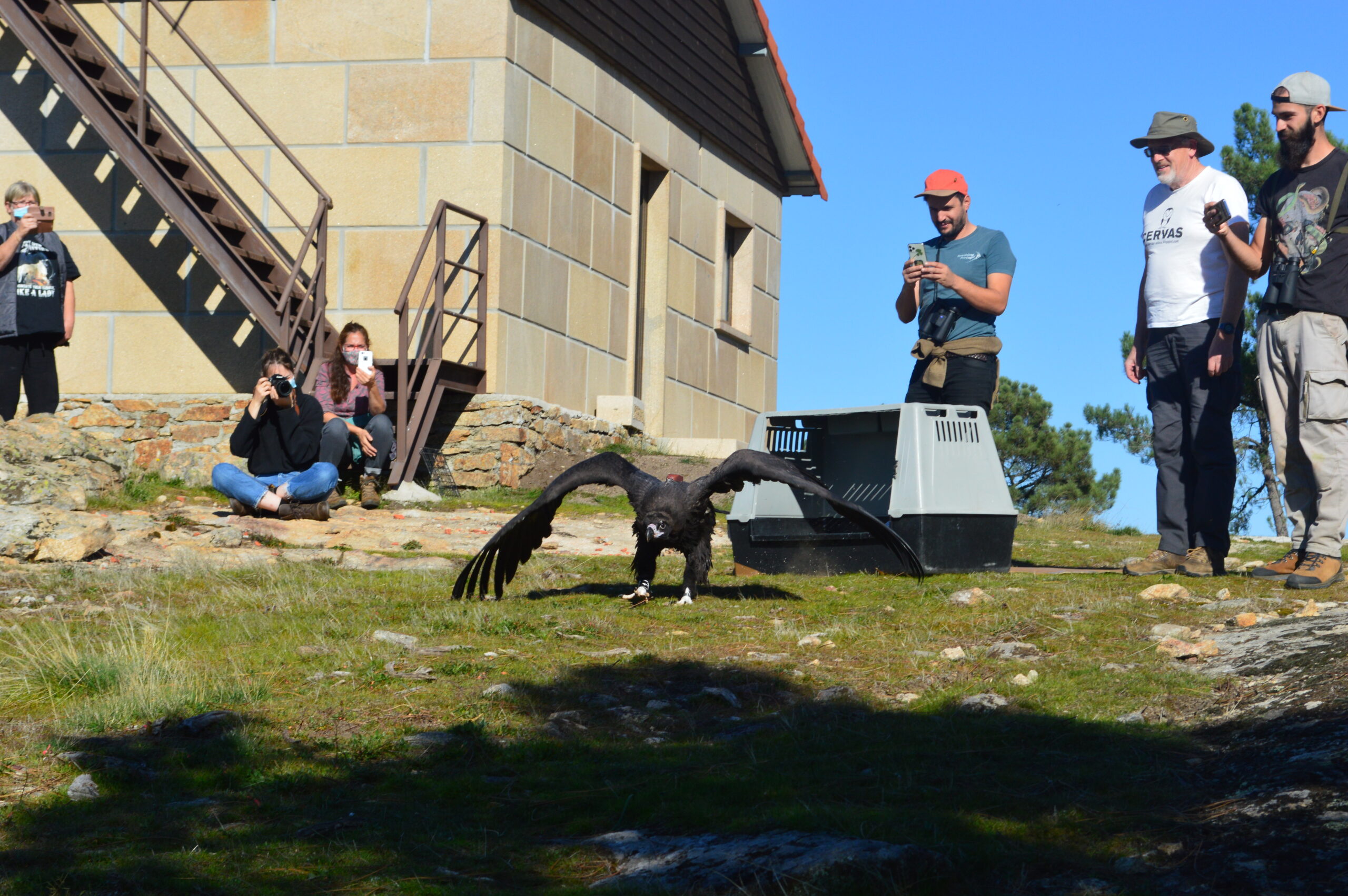 The return to nature took place on October 27th and included several elements from all the teams involved: CERVAS, ICNF and Rewilding Portugal, as well as some community members passionate about wildlife and even a pre-school class that had the first usual contact with the species, in an initiative carried out jointly with the municipality of Sabugal, which was represented in the figure of its vice-president. The return took place in Fóios, in the municipality of Sabugal, in Serra das Mesas, and was carried out in conjunction with the return of a griffon vulture to nature, which was being recovered under conditions identical to those of Fado.

This monitoring action is part of the project “Scaling Up Rewilding in the Greater Côa Valley”, coordinated by Rewilding Europe, and financed by the Endangered Landscapes Programme and the ARCADIA Foundation. This monitoring has an important role in mapping these locations and sharing the information with the Portuguese and Spanish authorities, as it is relevant in terms of land use planning, as disturbance in these sleeping places must be minimized, avoiding changes in land use and presence of infrastructure. It is also fundamental to study the eating habits of these birds to avoid the dispersal of the species from their habitat, and with this information, ultimately, it is possible to “improve the management of food sources for these scavenger birds and support the restoration of food chains places. And it will make it possible to reinforce the wildlife corridor along 120 thousand hectares of land in the Côa Valley”, explains Sara Aliácar, conservation officer at Rewilding Portugal. 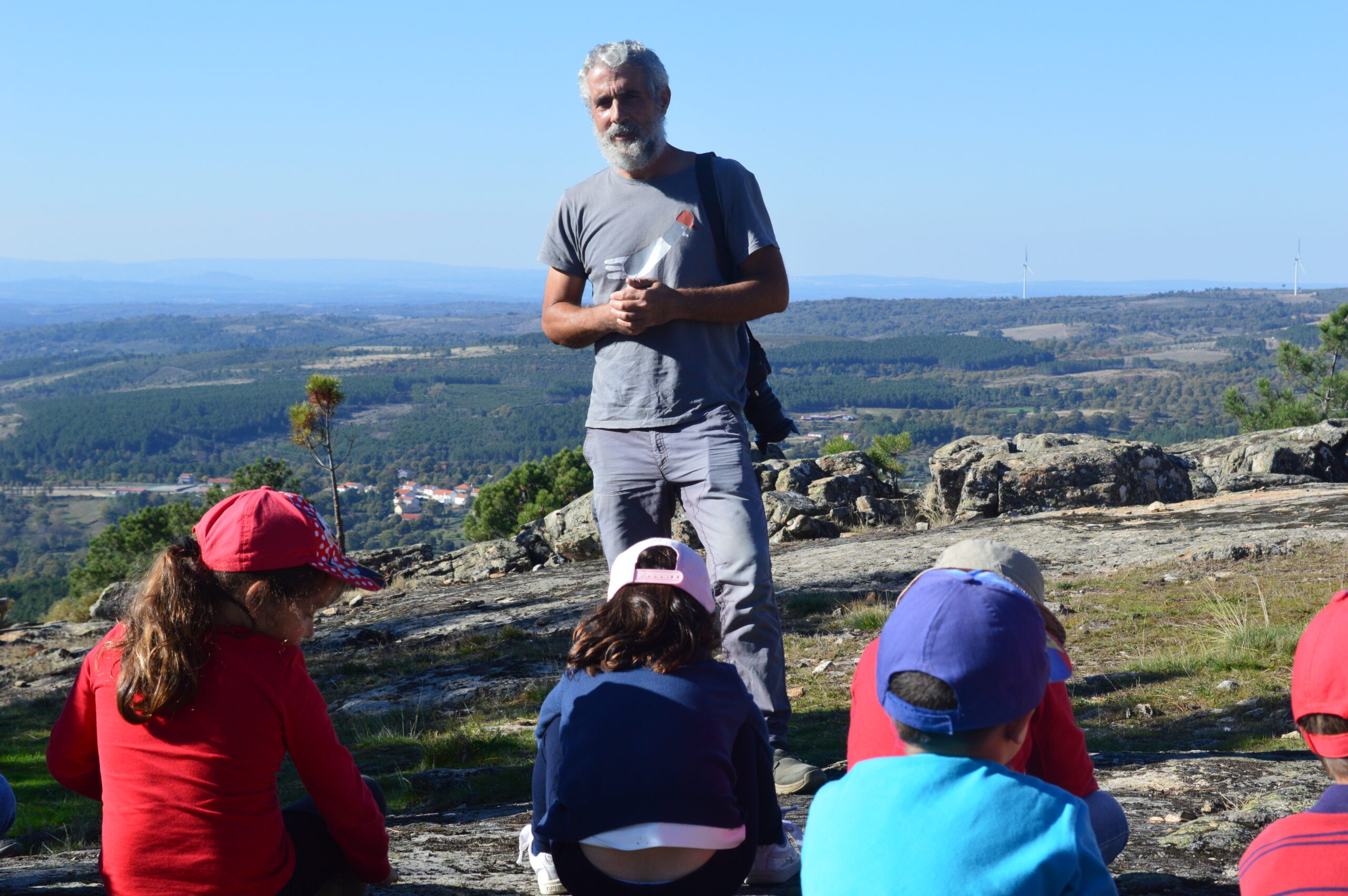 By following their movements and studying their behavior, Rewilding Portugal intends to support this endangered species and allow it to fulfill its fundamental role in ecosystems so that they become increasingly functional and complete.

The cinereous vulture and its characteristics

The cinereous vulture is one of the 3 species of vultures that inhabit Portugal, along with the Egyptian vulture and the most recognizable and sighted vulture, the griffon vulture. With the exception of the griffin, the two remaining ones are at risk of extinction. In addition to the enormous dimensions already mentioned, which make it a prominent bird of prey in the world, the cinereous vulture can weigh almost 12 kilos. The plumage is brownish-black, practically uniform throughout the body, with no feathers on the head. This species nests mainly in Mediterranean forests and cork oak forests, building nests mainly in cork oaks and holm oaks, and egg laying occurs between February and April, almost always consisting of just one egg. As a scavenger bird, it feeds almost exclusively on the corpses of dead animals. Unlike other large birds such as eagles, vultures, including cinereous vultures, do not have sharp beaks and claws or a nimble flight adapted to hunting live animals in good health. This fundamental role in ecosystems turns these scavenger birds into a true cleaning brigade that completes the circle of life, giving it functionality and making it complete.

The large wingspan, as mentioned above, allows them to make gliding flights of tens or hundreds of kilometers in search of food. Vultures have excellent eyesight which they use to detect dead bodies from a distance. Contrary to what is often said, vultures do not detect carcasses or dying animals through smell, decay or blood, as all vulture species in Europe, Asia and Africa have a very weak smell and use the vision. Only a few species of vultures in the Americas use the smell of decaying meat to find food. 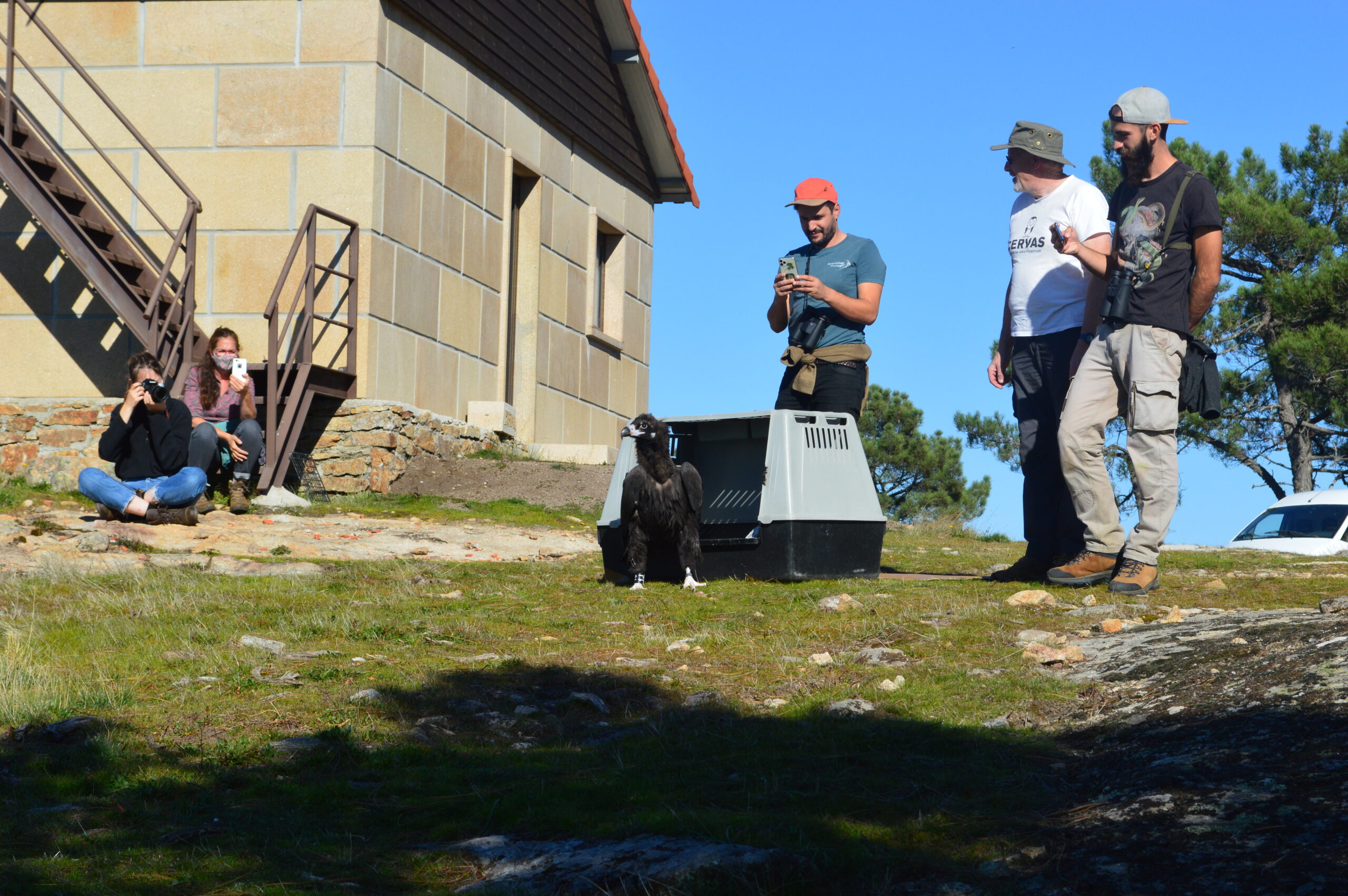 As its conservation status in Portugal is Critically Endangered (CR), there are several threats responsible for this weak situation of the species in our territory: intoxication and poisoning; electrocution and electric line shocks; human disturbance; habitat destruction, particularly; and also, the reduction of densities of some species whose carcasses are the ones on which it mainly feeds (ex. wild rabbit).