The Lupi EcoClubs, promoted under the LIFE WolFlux project, finally had the opportunity to take the young participants to field activities, where, in direct contact with nature, they could learn and consolidate very important lessons about what surround them. 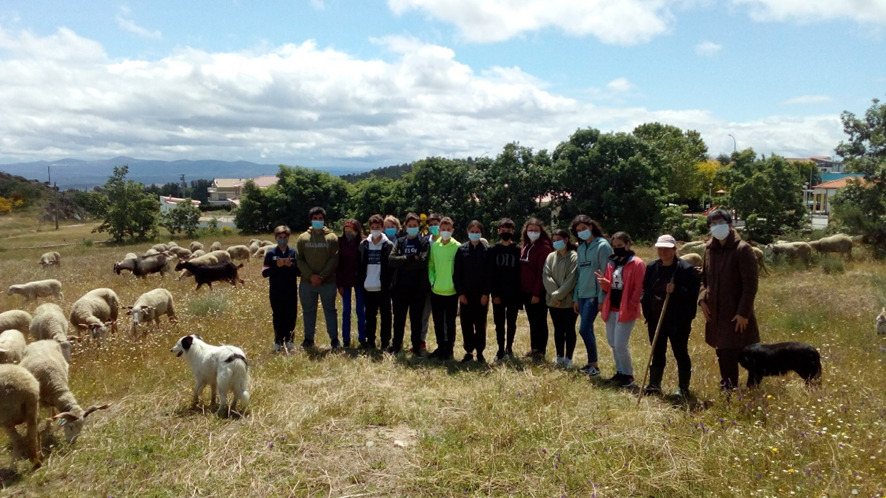 The Lupi EcoClubs, extracurricular clubs related to nature promoted within the scope of the LIFE WolFlux project, started this school year, although initially conditioned by the pandemic situation. Initially, there was a need to adapt these ecoclubs to a virtual reality, in which content could be transmitted to students who were taking classes from home through distance learning. To this end, specific content for this type of education was developed by ATNatureza, the project partner responsible for this action, together with Rewilding Portugal, as well as interaction between participating students from the various schools through the use of the Instagram social network, to enable the sharing of experiences and knowledge. In this first year, five schools in the district of Guarda participated, and the program that continue in the next school year to other schools in the districts of Guarda and Viseu.

With the favorable evolution of the pandemic in Portugal and the lifting of a large part of the restrictions, it was possible to return to schools in person and there began to take place outdoor activities, essential to transmit this type of knowledge, which is so practical and with such direct contact with nature. 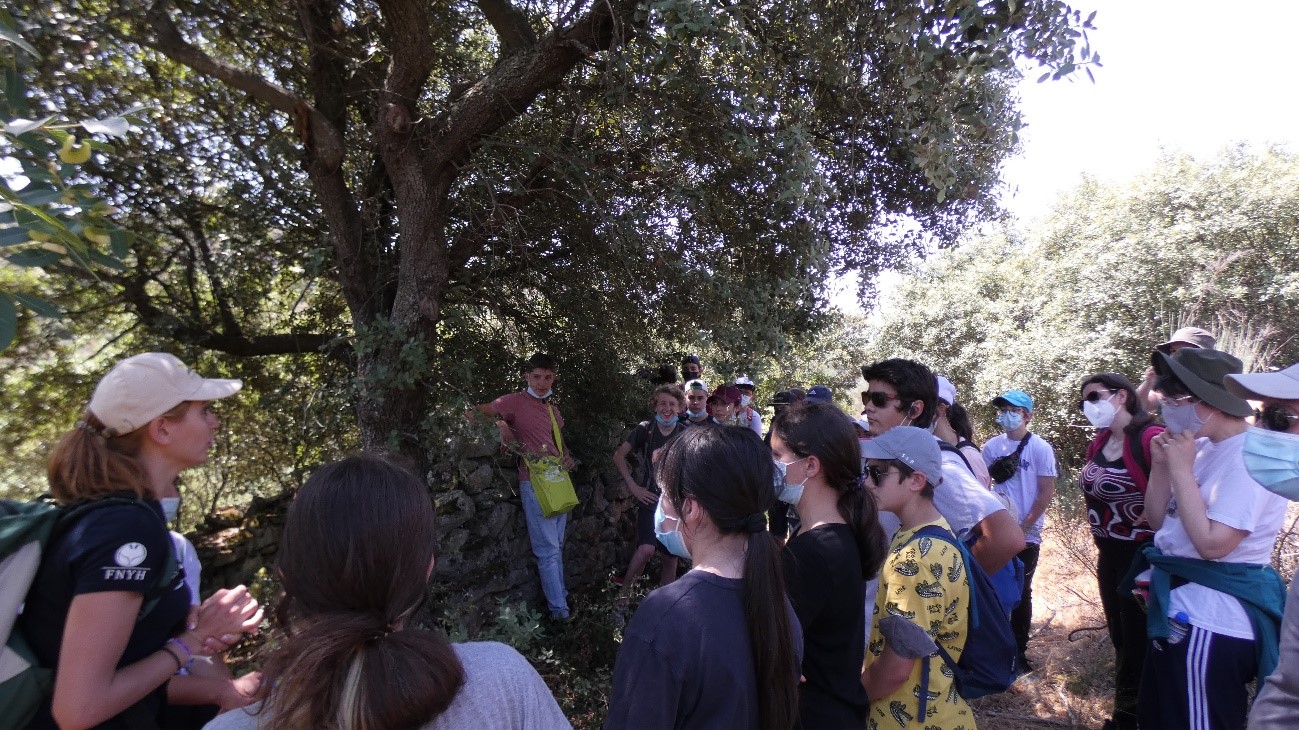 At Mêda school, students from the class included in this initiative had the opportunity to be in contact with a local sheperd, in order to better understand their work, their practices, their difficulties/dangers and also the preventive measures of damages that are used to reduce predation by the Iberian wolf to cattle, such as the use of guarding dogs, as was the case. The sheperd visited recently had attacks on his property and it was positive to be able to share the experience with the younger ones and the solutions he defends could improve the protection of cattle, while protecting the Iberian wolf at the same time.

Given the impossibility, due to the restrictions still in force, to bring all classes together in an educational field as was the initial objective, the participating schools were invited to visit the Faia Brava Reserve at the end of the school year, in order to consolidate the themes developed in the ecoclubs throughout the year, namely: rewilding of the Côa Valley, getting to know the local fauna and flora better, better understanding how nature conservation works in the reserve and in the region, and looking at the Côa Valley as an ecological corridor.

These experiences and field visits were fundamental to show on the ground how things happen in practice and to make known what the project and its partners are doing on the ground to make Portugal a wilder place and to guarantee the livelihood and viability of certain species fundamental to our ecosystems, such as the Iberian wolf. 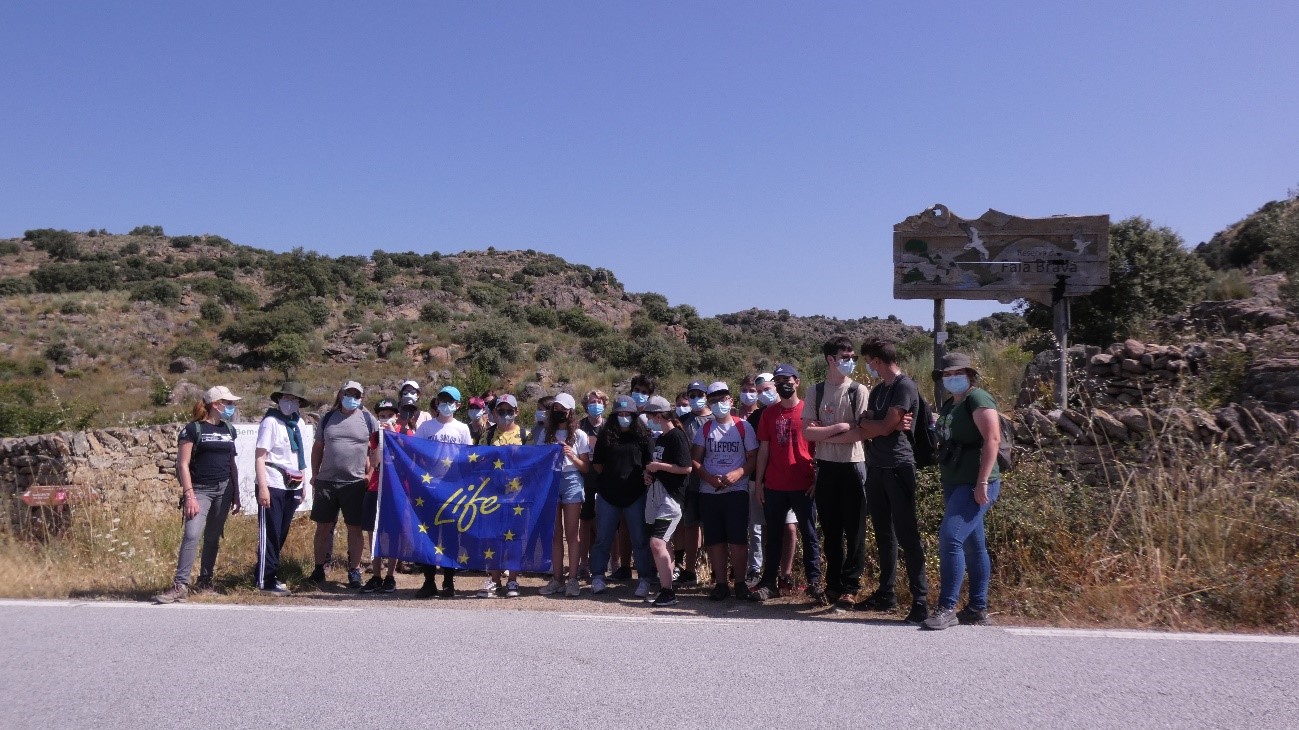 Due to technical difficulties, the Carolina Beatriz Ângelo basic school, in Guarda, could not participate in the field activity proposed for the Faia Brava Reserve, and the Lupi EcoClubs then suggested the alternative of carrying outdoor activities at the school during the World Environment Day, an initiative that was well accepted and which took place with 4 nature exploration workshops during that day.

The first activity took place under the guidance of Ana Nunes (ATNatureza), with the theme “Identification of wild birds”. In this workshop, the importance of birds in ecosystems was explained to the students, followed by a bird watching session in the surroundings of the school, with the aid of a terrestrial telescope. It was a good opportunity for the students to debut the Lupi EcoClubs field notebooks and write down their own experiences and observations carried out in nature.

The second workshop was held by Inês Bom (ATNatureza) with the theme “The wild nature of the Côa Valley”. Through an adapted version of the Glory Game, students had the opportunity, in a fun and playful way, to learn more about this theme and about their region and the biodiversity that it has. 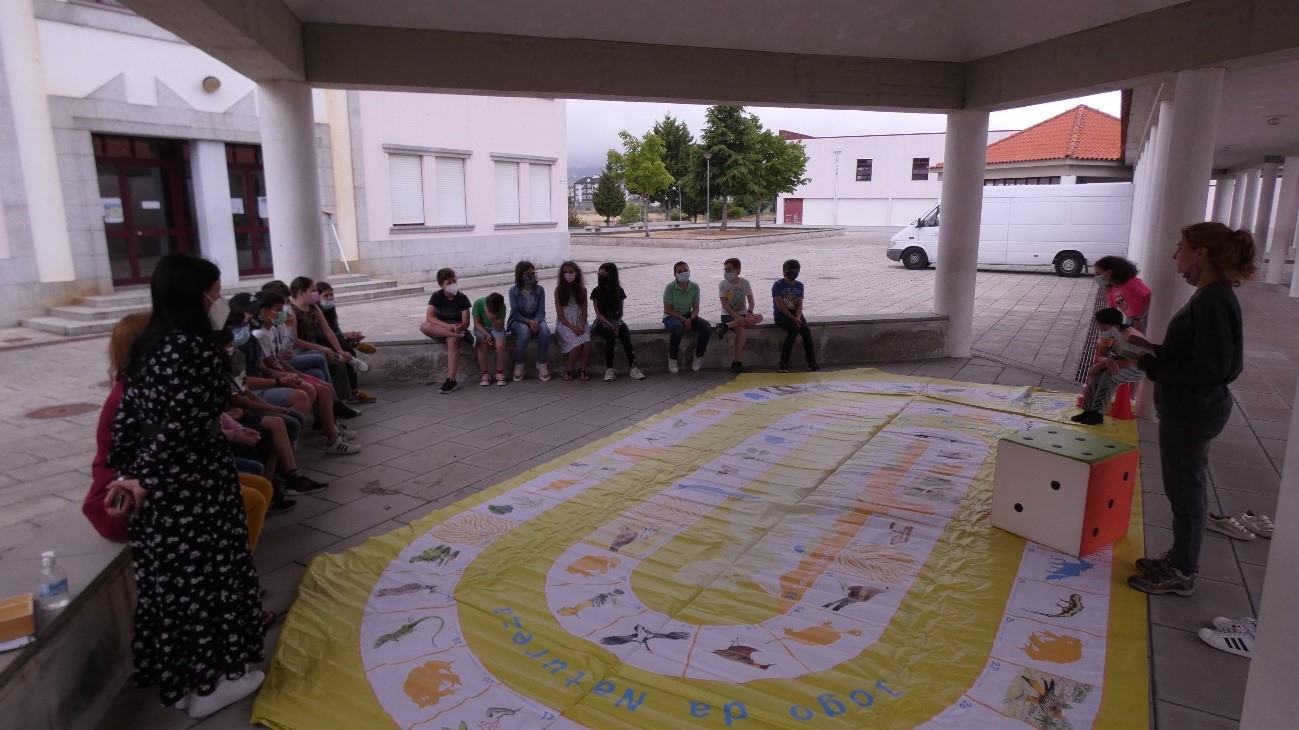 Marco Ferraz (ATNatureza), technician responsible for the ecoclubs and for the theoretical classes taught within them, was responsible for the third activity with the theme “Art in Landscape”. Students collected natural elements along a small walk in the school area, namely leaves and flowers, then creating art expressions that used them, in a totally natural and biodegradable way, which resulted in a panel that was on display at the school. A different way of exploring and looking at nature, valuing it through art and artistic creativity.

The last workshop was held by André Couto (Rewilding Portugal), with the theme “Trails of wild animals”, where students learned how the phototrap cameras work and their objectives, while also viewing photographs and videos taken in the Greter Côa Valley to understand how this fauna monitoring work is done and what it is for. They also had contact with biological material from the remains of wild fauna to get to know their surroundings better. 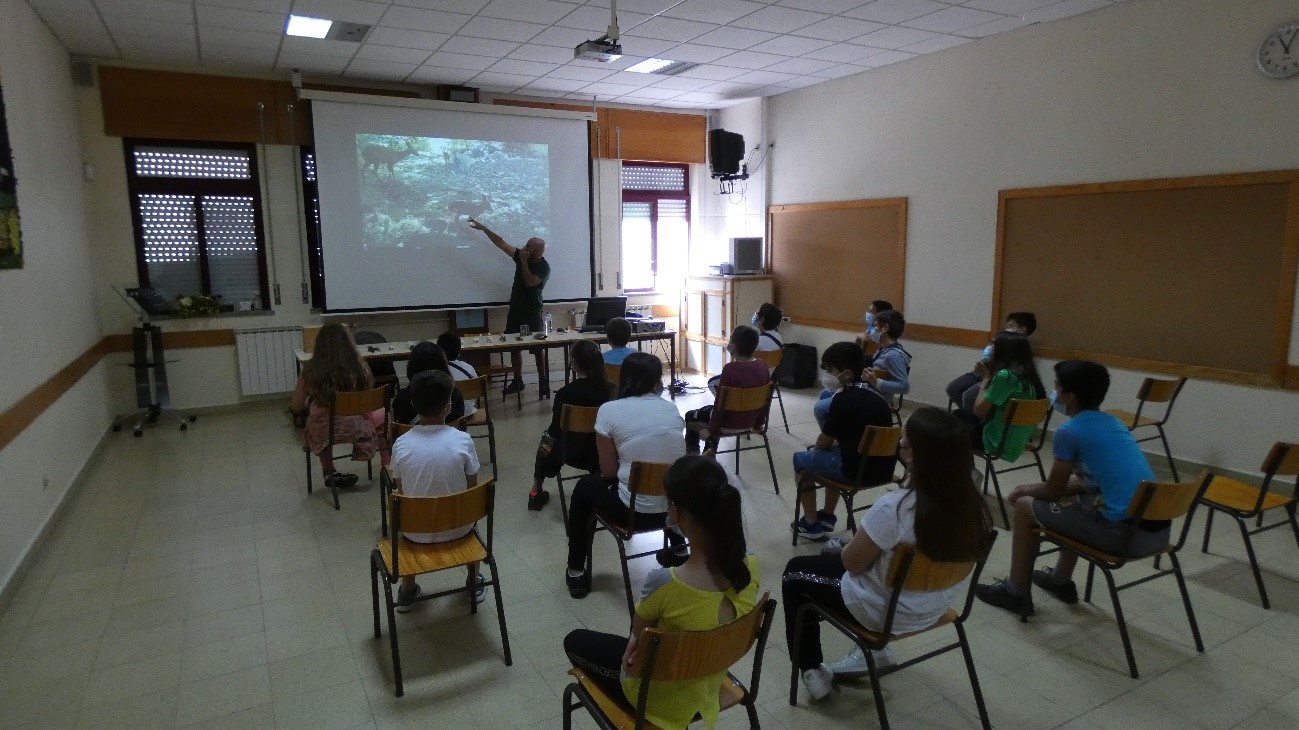 For Marco Ferraz, ATNature technician responsible for ecoclubs, this experience could not have been more enriching. “Having the opportunity to go to the school playground, meet the birds that inhabit the school playground, see a photo-trapping camera in operation and be able to talk to biologists in the first person is without a doubt a very enriching experience for students” he said , leaving an appeal of connection between children and nature. “It is urgent to reconnect children to Nature and this is only possible with effective and affective experiences of direct contact with Nature, so this project was designed to privilege contact with the countryside. This will be the great challenge for the next school year 2021-2022, eagerly waiting for everything to go well!”, he concluded. 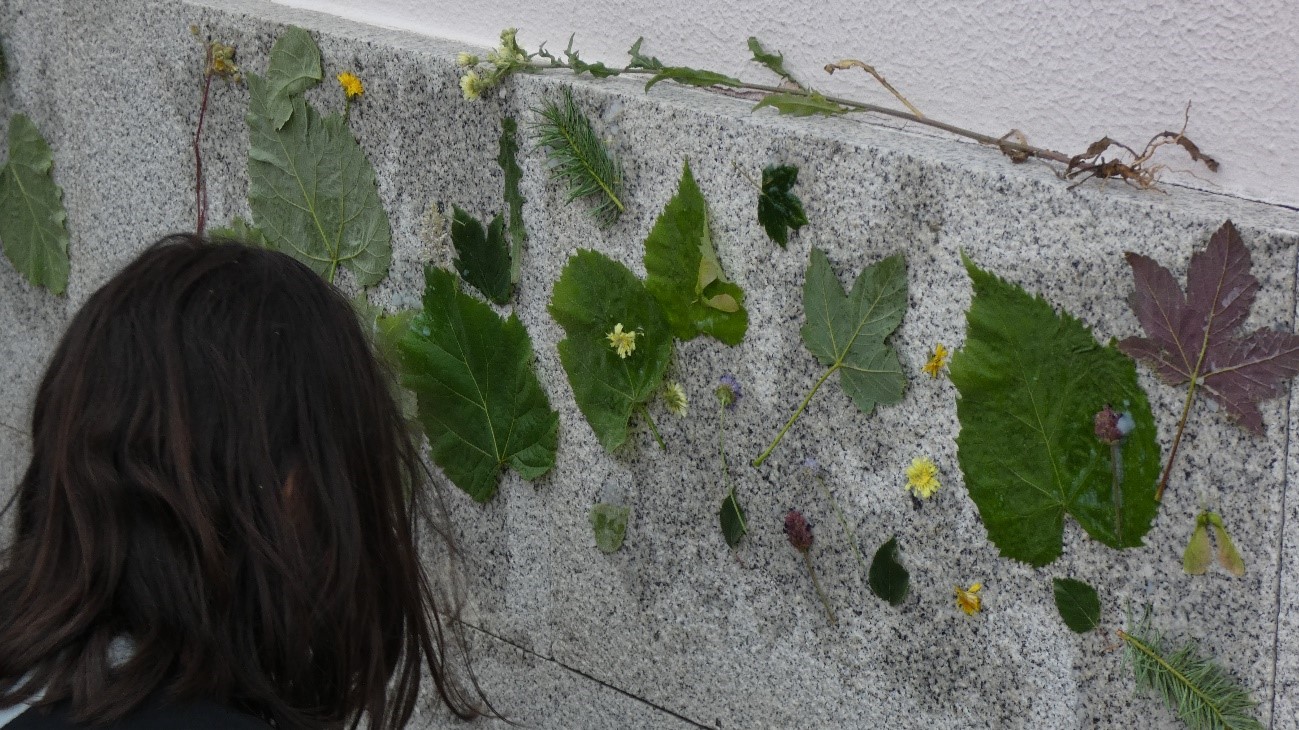 The LIFE WolFlux project, ongoing since 2019, aims to reduce ecological and socioeconomic barriers to the connectivity of the Iberian wolf subpopulation south of the Douro River in Portugal. In this sense, a series of actions are being implemented to reduce the main threats to this species. The project focuses on reducing conflicts with livestock, reducing furtivism and fires, and increasing the availability of wild prey for the wolf.

The project also intends to bring these themes closer to the younger public, in order to raise awareness and change mentalities from an early age, bringing them closer to nature. Lupi EcoClubs focus on teaching about the region’s biodiversity and promoting curiosity and pride in Portugal’s natural values.

The LIFE WolFlux project is financed by the LIFE program of the European Union and co-financed by the Endangered Landscapes Programme. The project is being implemented by a partnership of several entities, namely Rewilding Portugal, Rewilding Europe, ATNatureza, Universidade de Aveiro and Zoo Logical.

“Rewilding, a new path for nature in Portugal”: behind the scenes